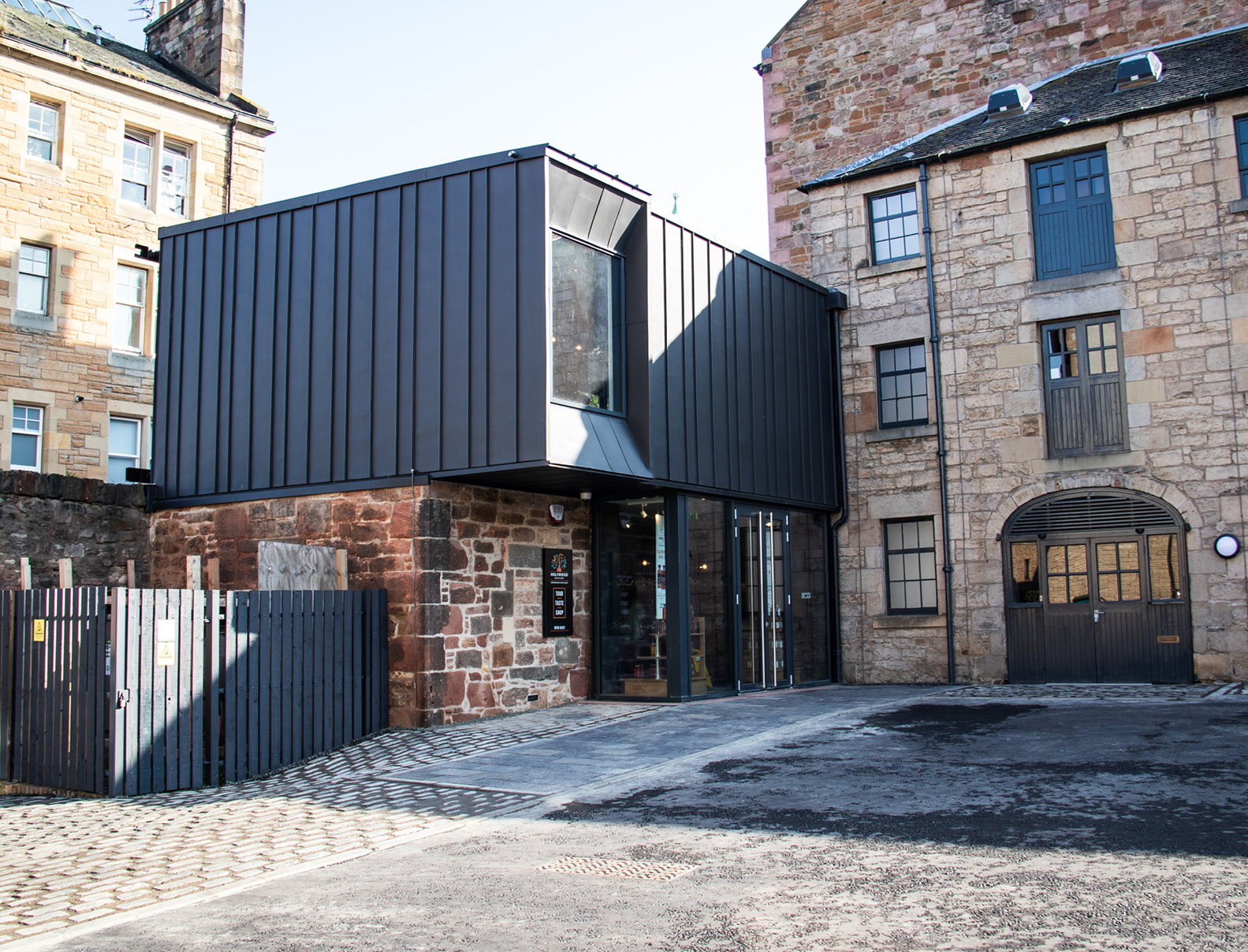 The Holyrood Distillery, Edinburgh’s first single malt distillery for nearly 100 years, has opened its doors. Located at the foot of the Salisbury Crags, the new distillery involves the adaptive reuse and extension of the Grade B listed building in the heart of Edinburgh. The project has been designed by 7N Architects and delivered in collaboration with ISG Construction, Blyth and Blyth, David Adamson Group, ICENI projects, Cubit3D and Threebrand as well as a fantastic team of specialist contractors and craftspeople.

Scotland is famous for its whisky and yet, despite the plethora of shops and experiences advertising the quintessential tipple throughout Edinburgh, there has not been a single malt distillery operating in the capital since Glen Sciennes closed its doors in 1925. At one point in the late 1700s there were an estimated 400 illicit stills dotted throughout Edinburgh, and yet in recent decades many of the remaining historic distilleries have either shut down or moved out of the city.

In 2013, recognising the lack of distilleries offering visitor experiences in Edinburgh, Canadians Rob and Kelly Carpenter and Scot David Robertson (former Master Distiller for The Macallan) decided to revive the single malt tradition in the heart of the capital. This July, Holyrood Distillery opened to the public.

Located at the foot of the Salisbury Crags, the new distillery is a Grade B listed building nestled on St Leonard’s Lane, just a short walk from the Royal Mile. The Engine Shed, as it has come to be known, was built as the terminus and goods shed for Edinburgh’s first railway, which opened in 1831 and was primarily used for transporting coal. Since its decommission most of the railway’s infrastructure has been demolished (the old railway line is now a pedestrian and cycle path), but the Engine Shed survived.

It’s clear why this building was chosen: long and narrow, its stone walls and deep-set windows speak of its past. Arched doorways lead onto the old engine yard, where coal was once loaded into horse-drawn carts but which has now been transformed into a welcoming courtyard. Inside, the visitor experience takes full advantage of the building’s height, guiding visitors through a multi-storey exhibition including the still room itself, which allows visitors to see the distilling process in action. This is unusual; in traditional distilleries the visitor experience is often retrospectively grafted onto the existing distilling installation, a process which comes with its complications. Distilleries require a complex installation of pipework, tanks and vessels; parts of the process are extremely hot and noisy with gasses, odours and vapours to be controlled. Retroactively building-in a visitor experience therefore often results in a functional but not necessarily comprehensive experience, and it can be difficult to capture the true and full magic of the process. Designing a new distillery meant weaving the visitor experience into the architecture from the beginning, so that it followed the complex production process as it threaded its way through the structure of the building.

In order to achieve this, our strategy involved configuring the respective stages so that they each had their own space (where operational or experiential reasons required it), as well as spaces where they came together, such as the still room. This approach required an examination of every aspect of the distilling process and the visitor experience, both separately and in tandem, to come to an arrangement that would heighten the experience at every opportunity and paint a complete picture of the process.

Further to the logistical aspects of the experience, it was important to speak to the overarching conceptual expression of Holyrood whisky as a modern dram that remains in touch with tradition. The design approach therefore combines heritage and modernity by revealing the original historic character of the Engine Shed building and enhancing it with a new extension which is both the arrival point for visitors and the climax of the visitor experience with the tasting area orientated towards Salisbury Crags. It has been designed so that visitors can savour a dram at the end of their journey whilst looking out to the dramatic landscape which embeds the experience in Scotland’s Capital City. 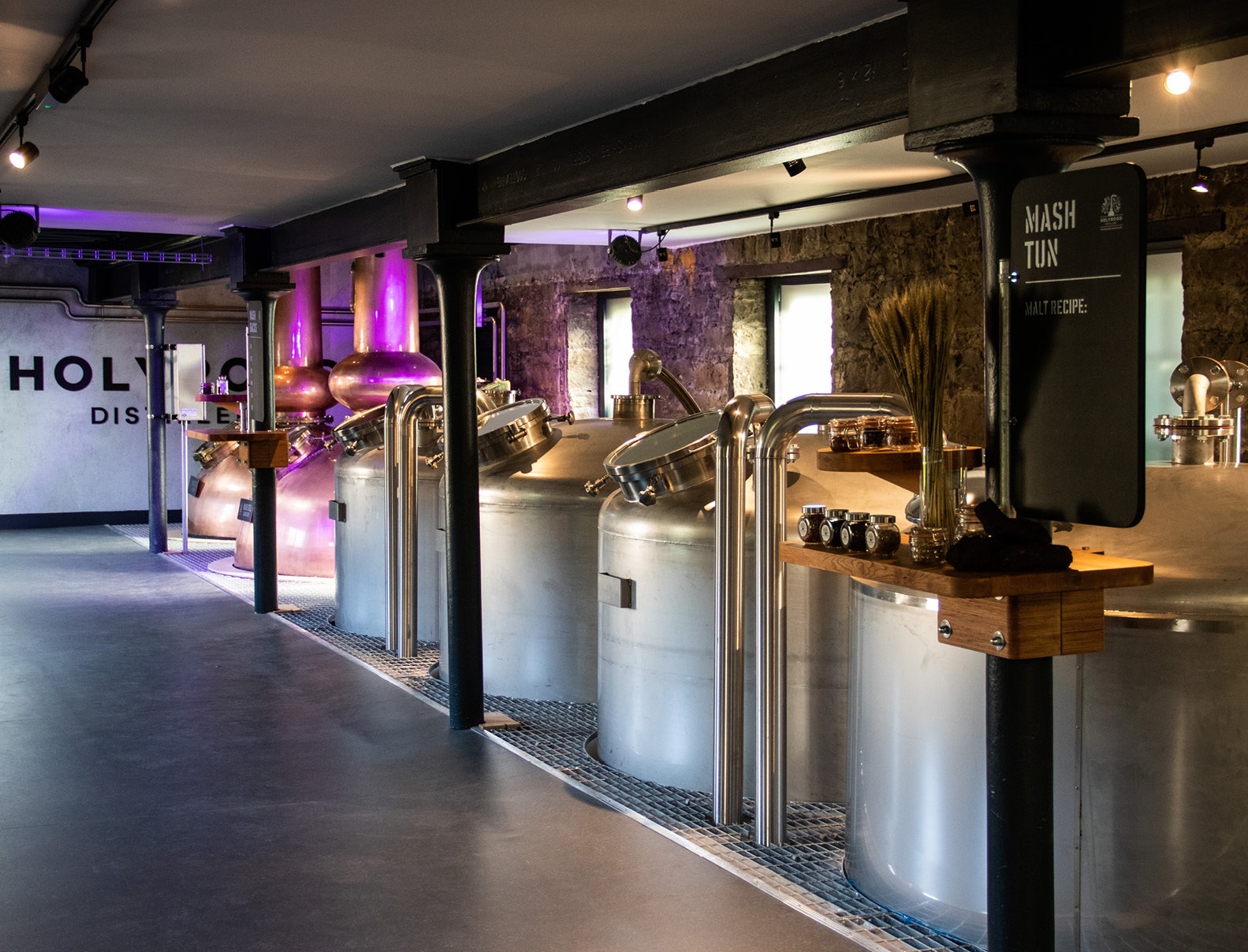